That Paul Patterson’s music possessed a razor-sharp sense of humour was already evident in his op.1, Rebecca (1965). By 1972, however, when the Comedy for five winds was written for the Vega Wind Quintet, one can hear just how much further his deployment of musical humour has developed, with a sophistication in its use of pastiche and its sense of comic timing far removed from the earlier work’s scattershot, “anything goes” brand of comedy.

The Comedy’s 4 movements follow the plan of a fast opener, a slow second movement, a moderately paced bluesy interlude and a fast finale, giving the work as a whole the appearance of a miniature symphony of sorts. After a peremptory flourish, the opening Prelude sets off with a raffish clarinet subject which dominates the movement’s loosely conceived sonata allegro. At the end, the clarinet clinches the argument with a raucous glissando, only to have the rug quietly pulled out from under it by the bassoon. If the clarinet took centre stage in the Prelude, it is the horn’s turn in the ensuing Soliloquy, which is in a simple ternary form. The recitative-like outer sections frame a central eloquent horn melody over throbbing syncopated chords.
Like the Soliloquy, the Blues third movement is in a ternary form. The outer panels are dominated by a languid, indolent clarinet subject immediately establishing the movement’s laid-back character. By contrast, the central section’s more intense oboe solo is characterized by a plangency akin to the penetrating wail of a blues harmonica. The final Hornpipe is a free fantasia on the famous Sailor’s Hornpipe Jack’s the Lad. It was Sir Henry Wood who popularized the tune at the turn of the century in that hardy perennial of the Last Night of the Proms, the Fantasia on British Sea Songs. But Wood’s way with the tune is positively decorous next to Patterson’s far more irreverent treatment. Throughout the course of this jeu d’esprit the Hornpipe is unceremoniously buffeted around in a spirited display of contrapuntal tomfoolery. That is, when it is not being distributed among all five players klangfarbenmelodie-style or turned into an incongruous waltz. But Patterson keeps the best joke for last. At the end, the Hornpipe is heard in its entirety for the first time, but the accents are pulled back a quaver so that the tune’s strong accents fall on the weak beats of the bar. A final burst of hilarity brings the proceedings to an uproarious end.

Gramophone August 2001
The three quintets by Paul Patterson (b1947) chart a fascinating stylistic course, from the lean astringency of the 1967 Wind Quintet (the product of a precocious 20-year old student at the Royal Academy of Music), via the Arnoldesque, face-pulling antics of the Comedy for five winds from 1972, to the crowd-pleasing Westerly Winds ( a 1998 transcription of his folksong-based Four Rustic Sketches for orchestra). Patterson writes with total confidence for the medium, and the performances are simply breath-taking in their co-ordination and tonal lustre 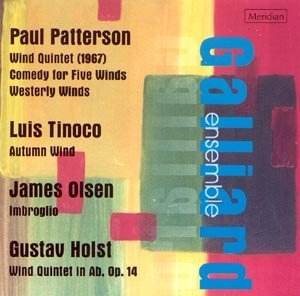